Busara is a thin and gaunt woman, with badly shaved head and large beautiful if sorrowful Brown eyes. She lives on the streets of Pavis. Her dirty but previously quality clothes suggesting a previous life of wealth and opulence.

If you would have met Busara a year ago, you would have a bright, easygoing, pretty, vivacious young noble lady, hanging off the arm of young, attractive, rich and well connected Lunar Office.

Now people see  a scared, bruised and battered homeless girl, with the shaved head of a Lunar collaborator. She is nervous, defensive, subdued and more than slightly bitter.

She was the niece of the leader of the Ingilli family, who had asked her to help him court favour with Lunar Power. As such she became good friend of Jessica Raus, A regular at Moonlighters and became the lover of a well connected young nobler serving as an officer in the Antelope Lancers.

Her life was a whirlwind of fine foods, nights out and the finest clothes. She mixed in the highest circles and was a political asset to her family. Though Busara was part of the party crowd at Moonlighters she was very much a one man woman.

Since the fall of Pavis she has been disowned by her family, publically humiliated as a  Lunar Collaborator, had her head forcibly shaved, dragged through the streets twice and saved from lynching only by the graces of the Chalana Arroy Cult. Her chief accuser is a man called Hurvis Darkwater another member of her own family and someone who had many business dealing with Lunars.

She has had no news of her former Lover, his body has not amongst the identifiable dead after the recapture of Pavis, but after all this time she fears the worst.

She now lives on the streets near the Chalana Arroy Temple, and survives under their protection. The priestesses have offered lodging at the temple, if she should work for it , but she still deems manual work beneath her station.

She feels grateful to the Chalana Arroy priestess, and has on more than one occasion considered Joining the cult. However she won’t as she  is aware it would require her to put to one side the intense hatred she feels for her family, she rightly feels betrayed and passionately wishes to avenge herself upon them.

Bursara has been revised and can now we found as part of the Rubble Runners Collection at:
https://www.drivethrurpg.com/product/302067/Rubble-Runners–A-collection-of-Pavis-Characters 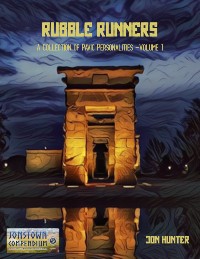