OK the first thing any system needs is a character definition system and the classic storyteller system is good.

A focus on varied social and mental attributes(stats), as well as physical attributes is an appeal for a game with thoughtful players interested in characterisation. So no changes to the base attribute model.

The RQ Pow stat will be tied into runes and virtues in this system. The Siz Stat will have to be assumed in strength and stamina, but its a trade off I am happy to get for perception, wits , appearance and manipulation. 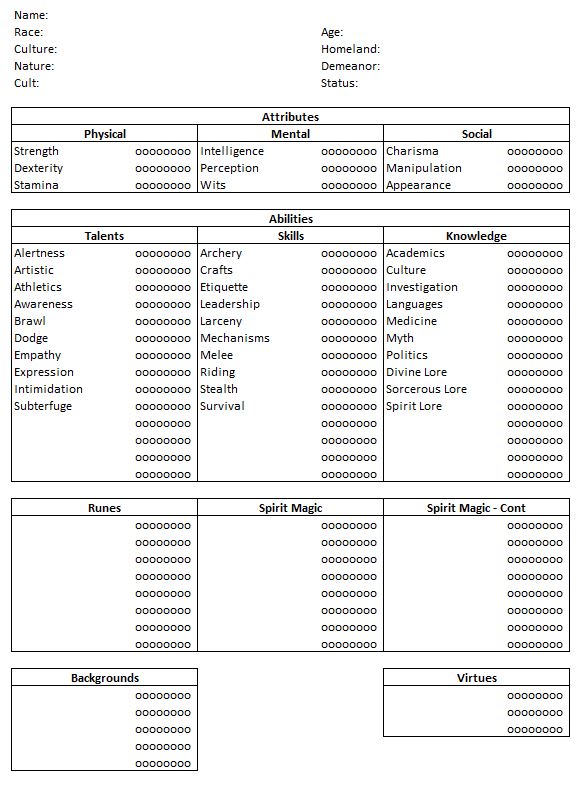 Classic WOD abilities do not translate into Glorantha and we do need to look at a specific Gloranthan set of abilities. I started with a Mage the Sorcerers Crusade abilities list trimmed some out, added some  Werewolf abilities and then created and added some that I thought were Glorantha to cover the basic abilities set.

The aim was to cover 90% of the players skill requirement with these skill sets, ensure a Gloranthan feel, and push players towards the use of magic and cult.

I’m happy with the coverage and choice but if anyone can suggest better names than Divine Lore, Sorcerers Lore, Spirit Lore I would love some alternatives.

As the classic storyteller five dots in skills and abilities refer to the normal species maximum for a normal Human, I think Glorantha Heros can surpass what is expected as normal and have gone for an eight dots per attributes as a ceiling.

I am currently unaware of how I will manage access to stats over 5 dots, but the capacity needs to be there to determine the detail at a later date.

Runes, Virtues , Spirit Magic, Backgrounds will probably all change through the development process of the game mash up, but they do need their place on the first draft of the Character sheet.

I have also decide to keep nature and demeanour from the WOD system as they can be interesting in helping characters define themselves.

Please comment on coverage of skills, and potential names for the three magical lores or anything else you think maybe fun.